Alzheimer’s: art is an eye opener

When coming face to face with the harrowing effects of Alzheimer’s disease, it is almost understandable that despite many efforts towards creating greater awareness, many people’s default reaction is that of nonchalance or simply not wanting to know.

In keeping with the quest to try to find ways to learn more about the disease, visual educator Estelle McIlrath, now working with the focus group at Groenkloof Retirement Village in Great Brak River, helped her “students” achieve something described as “an eye opener” when their artwork was displayed at the Mossel Bay Flower Show last week.

Earlier this year, the Mossel Bay Advertiser reported on the effect of art therapy done by McIlrath with patients at a private care facility for Alzheimer’s patients.

Here, the group, some of them in the final stages of the disease, participated keenly.

It was reported that after several art lessons, participants who had lost the ability to write, succeeded in communicating visually.

McIlrath stated that by using art as a memory stimulus, the right-hand side of the brain, the last part affected by the disease, was activated, bringing tremendous relief for Alzheimer’s patients in terms of de-stressing, gaining recognition and improving the self image.

Sessions are 90 minutes long and consist of a sequence of highly specific tasks and instructions that for these patients, present a great challenge.

During the five lessons the patients had to create their art which in the end was displayed last week and they were given tasks that challenged their inabilities previously listed.

Their first project was to paint a vase of flowers on a tablecloth. They had to, for instance, mix their own colours, using different shades of the same colour to paint the squares on the cloth and had to position their vases.

The vase had to be drawn using both hands, therefore activating both left and right hemisphere of the brain.

During the creative process, they were instructed to use sponges, ear buds, paint brushes and sticks at different intervals.

McIlrath said: “By the fourth lesson, on completion of their flower piece, there was recognition of their own work, which was highly rewarding.

“One patient, despite having undergone hospital tests prior to the session that morning and being excused from class so she could rest, insisted on attending on her own accord and asked to finish her piece and she did.”

The latter, an 83-year-old woman and former general practitioner, who had her own practice in Johannesburg for 25 years, cannot recall nor write her own name anymore.

By the sixth lesson, she wrote both her and her husband’s names, as well as a few sentences on a piece of practice paper.

During the Mossel Bay Advertiser’s visit to Groenkloof this week, the woman’s husband confirmed this and said that although it is still early to confirm the exact results in improved capability, he is amazed at what his wife has accomplished.

The matron at the Groenkloof sick bay, where weekly art sessions are currently hosted, Sister Maria Griessel told the Mossel Bay Advertiser that individual interviews with the patients’ respective care givers could prove to be useful in determining any improvement.

“As for me, looking at what they have achieved in this short while to create the art that went on display, I must say, it is an eye opener.” 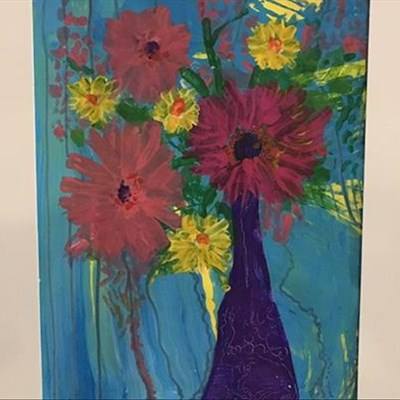